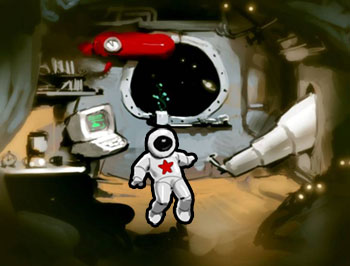 Having a great idea for a game is valuable. That goes without saying, but exactly how valuable is such an idea? I've become rather cynical on the subject after working a while in the games-industry. If 50 people work on one game for over two years, how many good ideas are thought up? And how many of those are needed for the next game? Even if you don't have a team of 50 people or don't plan to work on one project for that long, there is a good chance that you'll come up with a bunch of ideas that could become great games; Ideas that never will be realized.

Cosmonaut is such an idea. I came up with it one sleepless night thinking about how I would like to be able to watch the stars from my bed. I realized that it would never be a good fit for Starbreeze, the game-developer I work for. Nor would it be something I could realize myself, since it was too content-intensive. Still, I found the thought fascinating and couldn't get it out of my mind. There was something special about the lonely cosmonaut staring out of the window in his stranded shuttle and I had to at least make something out of it. The solution was to write a brief high concept about it. It's not very likely that I will ever make this game, but I can always look at the sky at night and dream.

You can find the high concept at www.collectingsmiles.com/cosmonaut